-The real voyage of discovery consists not in seeking new lands but in seeing with new eyes.

Today my inspiration comes from Moana, of all places. Specifically when she bursts out of the tree/cave shouting “WE WERE VOYAGERS!!” Maybe it’s because I’ve watched it well over 100 times & that the songs are actually really good.  I also LOVE the girl who voices Moana (Auli’i Cravalho) who ALSO happens to be a main character, Lillette, on one of my new favorite shows “Rise” on NBC – if you haven’t seen it, YOU MUST.. it just wrapped up the first season & is on HULU.  Anywho, she was 14 when Moana began filming and it was her first acting/voice over gig ever.  She also gave an incredible performance of “I am Moana” at the Grammy’s this year @ the age of 16!  Auli’i Cravalho Live Performance she is AMAZING.

As the parent of a SN child, I can sometimes get stuck in the rut of following the crowd.  Just kind of get into a groove of going along with whatever the doctors, therapists, and specialist tell me I should be doing for my little human.  While they’re the “experts” on their chosen subjects, they are not experts when it comes to my daughter.  Now, that IS NOT saying that our therapists and specialists haven’t been a HUGE part of her progress, but sometimes what works for “other patients” simply don’t work for her & yet, because these “professionals” have told me this or that, then I go along with their idea’s simply because I don’t know what else to do, even when said ideas don’t work.  Even though I could see day in and day out that some of the “ideas and ideals” weren’t working, I was comfortable on our island.  I said in an earlier post that when it comes to raising a SN kid, that I felt like a failure because on most days, I have NO IDEA what I am doing.  But, I do know my child.  I learn more about her and her “quirks and vices” every day.  I watch her and study her and see how she “thinks” and how she learns.  It is easy as a SN parent to “stay on our island” of grief, diagnosis, prognosis, difficulties, stress, depression, anxiety, and overwhelming fear of simply not doing enough or being enough for our kids.  To quote Chester Bennington (former lead singer of Linkin Park) – “I wanna let go but there’s comfort in the panic.” We get stagnant because those emotions cling to us and we get comfortable in them because we learn how to handle them and become “friendly” with them by accepting that it is our every day life from now on.. we get stuck on our island, isolated by ourselves, our children, their diagnosis, and the fear/panic/depression etc. that comes with all of those things.  I’m here to tell you lovelies.. we were not meant to stay on this island.  We were mean to be voyagers. 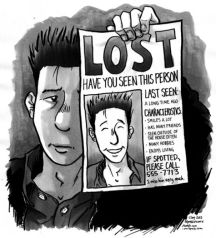 A synonym for voyage is excursion.  One definition for an excursion is “a deviation from a regular pattern, path, or level of operation.” Talk about hitting the nail on the head! It seems as if our entire lives are a deviation from everything we imagined when we first saw that little plus sign on the pee stick.  On my good days, I try to think of our journey with little human as an adventure.  I’ve always thrived on high stress and fast paced environments, but then again, I have always thrived at most anything I chose to do up until now. That is one part of my life that I have had to come to terms with, however selfish and bitchy it may seem.. I CHOSE this.  Not the diagnosis or the daily struggles my child faces, but to get pregnant.. to have a child.  I chose this voyage knowing the outcome was without question unknown and unseen.  Even those that say they had a “woopsie or unexpected” baby isn’t even really that, at least in my opinion.  Every adult (I use that word loosely as sex education is now taught in some elementary schools) knows how babies are made & how to prevent them.  If you didn’t want to get pregnant, have the good sense to be on birth control & for your partner to use birth control as well, double up kiddos because one may fail as many a woman on the pill/patch/shot has learned the hard way. Every woman that chooses to have unprotected sex (whether that be not on birth control themselves and/or their partner not wearing protection themselves) are rolling the dice when it comes to what path their voyage will take.  Calm sea’s and smooth sailing, or rough and shark infested waters. The first “step into the water” must come in full acceptance of the path we have chosen as parents when we decided to have our children.  When you are able to see the child you chose to bring into this world INSTEAD of simply seeing their diagnosis, that you most certainly DID NOT choose, it then opens up at least a little window of light in a sometimes blindingly dark room.

Even through those rough and shark infested waters we may have found ourselves and our children in, we MUST find a way to get off of our island & brave this voyage, adventure, and excursion that is laid out before us.  If I have learned one thing from the past 5 years, it has been to trust myself again.  Trust my instincts, my gut, my conscience & my “mother’s intuition.”  YOU know your child best, even when you think you can’t possibly know as much as the doctors or therapists or specialist.. listen to their laughter and cries and then remind yourself that you could pick out those specific sounds in a room of 100 other children.  Watch your children, find what works with them. Trial and error, patience (of which I thought I had MUCH more of), and plenty of cuddles/laughter/tickle sessions and love can get you onto the next stage of your voyage and adventure.  Also, as always.. know you’re not alone in your excursion.  We have a VERY big boat my friends, so let’s teach each other how to sail.

View all posts by Sara Kathleen